This easy no bake Irish Cream cheesecake is perfect for holidays or celebrations. A chocolate almond flour base with a rich, creamy cheesecake that tastes like a glass of Baileys Irish Cream.

Rich, creamy with a kick of Baileys Irish Cream, this cheesecake only has 6g net carbs a slice and is also gluten free.

Traditional Bailey Irish Cream Liqueur has 11g carbs in 1 fl oz serving due to the sugar content. By using a low carb sweetener, our low carb version only has 1g net carbs. Making it a great drink to use in desserts as well as enjoying over a cube or two of ice!

My first attempt at a Baileys cheesecake used my sugar free Baileys Irish Cream. Although the cheesecake was delicious I came across a couple of problems.

The taste of the Baileys was very faint and the more I added to the cheesecake mixture, the filling became very soft. Without adding gelatin to make it set, my attempt at a Bailey's cheesecake looked more like a mousse.

Then a cooking eureka moment happened! Instead of pouring a large glass of Irish cream to the mixture, add the Irish cream ingredients directly into the cheesecake. After all, Irish cream is basically a mixture of cream, whiskey, coffee and chocolate.

This Baileys cheesecake recipe has whiskey, which with many other spirits is carb free. Whiskey can be drunk in moderation or as a treat. Despite being free of carbs, the body will process alcohol before fat first.

We have a few low carb treats with alcohol in them. The emphasis being a treat though! Adults only too!

How to make No Bake Irish Cream Cheesecake

With any no bake cheesecake, it's best made ahead to set over night. This may require will power and the urge for a midnight fridge run, but be strong! The Chief Taster swears it was better 2 days later.

For the whiskey, we recommend a half decent whiskey. Cheap whiskey will give a harsh taste but divorce may occur if you reach for the 18 year malt in the drinks cabinet! I used a Jameson Irish whiskey for this recipe. Irish cream calls for Irish whiskey!

The base is made with almond flour with a sugar free cocoa for a chocolate base. The chocolate flavour pairs great with the Irish cream but could be omitted. The filling is the star of this no bake cheesecake.

Can I make this without whiskey?

Despite the whiskey giving this no bake cheesecake the distinct flavour, it can be omitted for an alcohol free dessert. The flavour will be more of a coffee chocolate taste but still a great low carb dessert.

If your cheesecake is too soft, it could be because the whipped cream was over worked. If the cheesecake is still too soft after 12 hours in the fridge, pop it in the freezer for a couple of hours.

The cream cheese needs to be soft before whipping to ensure no lumps. 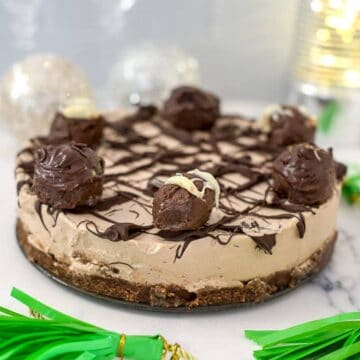 The net carbs will be the total carb count minus the fibre count. Carb count excludes sugar alcohols. Any nutritional analysis on the website is based on an estimate, calculated by Spoonacular from the individual ingredients in each recipe. Variations may occur for various reasons, including product availability and food preparation. We make no representation or warranty of the accuracy of this information.

Serving: 1sliceCalories: 528kcalCarbohydrates: 9gProtein: 9gFat: 52gFiber: 3g
Have you tried this recipe? Leave a review or take a picture and share it on InstagramMention @Divalicious_Recipes or tag #divaliciousrecipes