Keep your festive fun low carb with this keto egg nog recipe.   Creamy with a kick of rum, even Grandma will enjoy a glass of this.

Homemade egg nog is utterly delicious and you can play with the recipe to suit your own taste. Add more cinnamon or even rum if you wish! Keeping Christmas low carb but full of flavour!

To be honest, I’ve never really drank egg nog, so had to visit the shops for a few samples.  All under the guise of research.  There’s nothing like sipping egg nog in the morning and telling the Chief Taste “no judging,this is work”!    I think that the name of egg nog had previously put me off as I had imagined the drink to be “eggy”.

Does EggNog Have Carbs?

Traditional egg nog is full of carbs as it has sugar and milk in it. However, it's an easy recipe to adapt to a sugar free and low carb version. Use a low carb sweetener and swap the milk with almond or coconut milk. Voila! Holiday drinks for everyone!

How to make Keto Egg Nog

Traditionally, egg nog is made with whole milk but the carbohydrates in milk can soon add up with 100 milliliters being 4.7g net carbs. So for this keto recipe we used almond milk. We have also made this with a blend of almond and coconut milk. That was a bit creamier but had a slight hint of coconut.

I used a custard base recipe for this low carb egg nog recipe that just uses the egg yolks. There are a few recipes that involve whipping up the egg whites and adding them to the recipe, but I felt more comfortable with making this version.

For the rum we use a dark rum. I am fortunate to live in a country that produces great rum but I also enjoy the rum that Barbados produces. The rum in the photos is Mount Gay. You could try a white rum but whatever rum you use should be of a good quality. It really does make a difference to the flavour.

We used monkfruit for the sweetener but we had originally made this with erythritol. Either one is fine but personally we prefer the monkfruit as it does not crystalize when cool. Try brown monkfruit for a deeper flavour too. We've used it and loved it.

Can you make eggnog alcohol free?

If you want all of the taste of egg nog but without the rum you can either leave out the rum or use rum extract.

How to serve sugar-free eggnog

Eggnog can be served immediately when warm or chilled. If you chill the egg nog for later, it will thicken up. Serve over ice (my photos have an ice globe as they last longer!).

Keep the egg nog in a sealed container in the refrigerator and it should last between 4 and 5 days. I like it the next day when it's thicker. If you want to serve it warm, pour the egg nog in a saucepan and gently heat it through. Don't allow it to boil though.

Have you tried Coquito?

If you want a coconut version of egg nog, try our sugar free coquito recipe. It's egg nog's sassy cousin! Rum and coconut is a tropical must for us!

If you don’t have rum for this recipe, brandy, whiskey or bourbon would be a good swap.

The recipe quantity is for 10 glasses.  That’s normal polite people sized glasses and not my usual “pour it like a milkshake in a tumbler” portion.

We used our eggnog for the frosting on our gingerbread cupcakes.

Enjoy the holiday season but stay on track with many of our low carb recipes.

This recipe was originally published in December 2018. The photos and content have been updated with a tweak to the recipe. 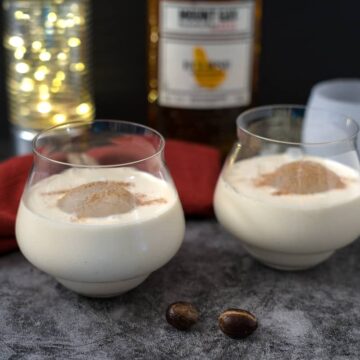 Any nutritional analysis on the website is based on an estimate, calculated by http://nutritiondata.self.com from the individual ingredients in each recipe. Variations may occur for various reasons, including product availability and food preparation. We make no representation or warranty of the accuracy of this information