This stuffed spaghetti squash recipe is flavoured with spinach and goats cheese to make a hearty vegetarian dish.  All the colours of autumn on your plate.  With some added goats cheese!

Spaghetti squash is a delicious alternative to pasta, although remember that the taste of this will still be squash and you need to season it or add other flavours.  It does not have a sweet taste as other squashes like pumpkin.  It gets its name from the flesh which after cooking, is pulled away from the skin and resembles spaghetti noodles.   The seeds are removed before cooking but you could set them aside and roast them for a snack or even sprinkle them over the cooked flesh.

My first attempt a few years ago with spaghetti squash was not tempting.  I had it plain with some seasoning and butter but did not care for it.   So after looking at the piles of golden spaghetti squash now in the supermarkets, thought that it was time to have another stab at it.

This time, I decided to stuff it.  That way the flavours are added and it is served in its shell, making it a very hearty dish for lunch that day.  I love the flavour combination of spinach and goats cheese so decided on them.  I also wanted the dish to look colourful and inviting so threw in some red onion for extra colour.   The fun part of making this dish is pulling out the spaghetti flesh.  I could have pulled apart 100's in a production line happily that morning.

The dish was just so easy that it's another one the Chief Taste could possibly attempt without supervision.  Cut in half, bake, add other stuff and voila!  Lunch for two!   He enjoyed this with a side of salad and went back to work after lunch revived and ready for the afternoon's challenges.  I cuddled up with the dogs and had a nap.  Think I got the better deal that day!

If you enjoy this recipe and never want to miss another recipe again, sign up for the weekly newsletter! 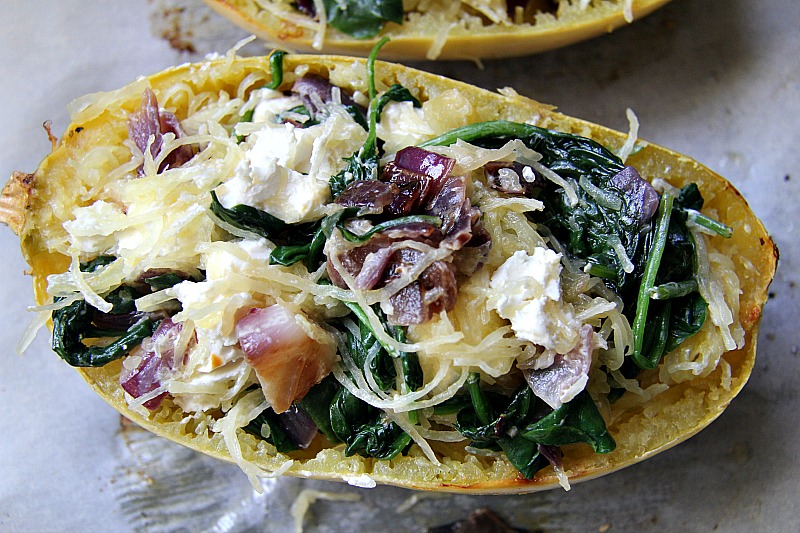 Serving: 1halfCalories: 349kcalCarbohydrates: 22gProtein: 12gFat: 25gFiber: 6g
Have you tried this recipe? Leave a review or take a picture and share it on InstagramMention @Divalicious_Recipes or tag #divaliciousrecipes
You Might Also Like
Baked Ratatouille