Halloumi stuffed peppers are baked in the oven but are also delicious cooked on the BBQ too.  You can serve them as a side or a main with a salad.  Low in carbs, gluten free and keto they are a colourful addition to your plate.

This dish is just fabulous on the BBQ as well as being roasted in the oven.   It appears at most of my BBQSs and disappears quickly, even amongst the meat eaters.  They are very easy to put together and easier to eat!  I used halloumi cheese but have also experimented with feta which was just as nice.  You could have these as a main with salad, or as a veggie side dish.  I just love how the lemon, garlic, thyme and mint combine to give a fresh flavour to the halloumi cheese.

Halloumi cheese has a high melting point and a perfect cheese to slice and grill or fry.   When it is fried we call it "squeaky cheese" due to the texture of it cooked against your teeth.  Is there nothing better than slices of cheese fried?

The sweetness of the red peppers goes so well with the saltiness of the halloumi cheese in this recipe.  Yellow or orange peppers could be substituted but not green.  They do not have a sweet flavour at all.  Best left to chop up and have in a green salad.

If you decide to cook them on the BBQ, you could either cook them directly on the grill over the coals,  or perhaps on a foil container.   The peppers will be slightly charred but you want the Halloumi cheese to be slightly golden and as melted as it can be.  A delicious low carb, keto and gluten free addition to your meal. 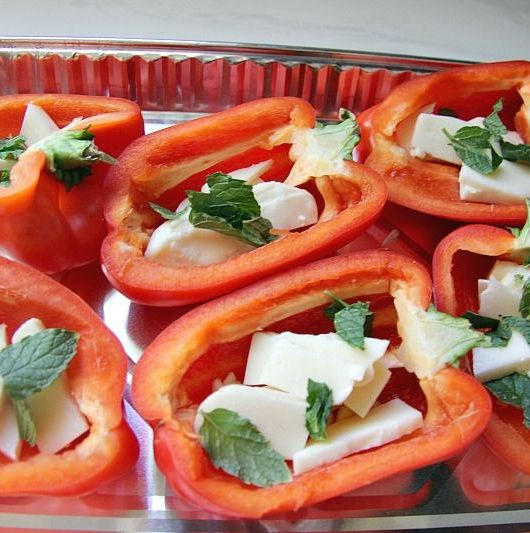 Nutritional Info per half: 198 Calories, 15g Fat, 10g Protein, 6g Total Carbs, 2g Fibre, 4g Net Carbs
Have you tried this recipe? Leave a review or take a picture and share it on InstagramMention @Divalicious_Recipes or tag #divaliciousrecipes