This coconut blondies recipe is deliciously moist and light. Baked with coconut flour, flavoured with vanilla and desiccated coconut, this is a tasty cake.

Although a traditional blondie recipe uses brown sugar, I have used a sugar substitute. A blondie is simply a brownie but with no cocoa powder. You could add chocolate chips or chopped nuts to this recipe but I just wanted to keep it simple.

I wanted to make a trifle recipe but I didn’t want to use a chocolate sponge as so many of my recipes seem to be full of chocolate, particularly my brownies. I wanted the sponge for my trifle dessert to be brownie-like in texture, but had to be vanilla. I didn’t want a strong texture sponge but something a little bit softer. So, I adapted one of my coconut flour brownie recipes and a coconut blondie was baked.

This coconut blondies recipe was met with such a rapturous review from the Chief Taster that I made another batch once he had finished his last brownie. Normally I bake, then move onto the next recipe. It can be a while before I revisit a recipe so he got lucky that week. I also wanted to double check that the first batch of coconut blondies was not a one off. The second batch were just as moist and tasty.

A great batch of coconut flour blondies that has now made me note that this is a recipe to come back too and play around with the flavours. It is an easy coconut blondie recipe to make too. The flavour combination of coconut flour, coconut milk and desiccated coconut is not full on coconut. The vanilla softens these flavours and I suspect that adding chocolate chips would be the cherry on the cake. I need to have a play with low carb white chocolate as this would a delicious addition.

When mixing this coconut blondie batter, you might want to add a dash more coconut milk if the mixture looks a bit too sticky. Coconut flour various between brands and some like a little bit more moisture than others. 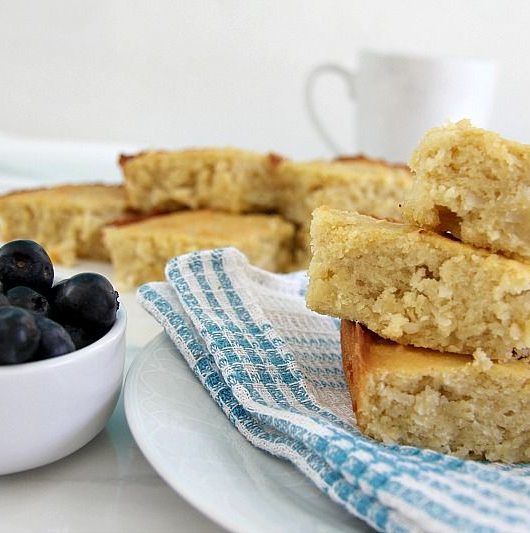