These low carb apple roses cupcakes look elegant and complicated but actually are easy to make. Made with coconut flour and flavoured with cinnamon they are a delicious low carb and gluten free cupcake

Thin slices of apple are placed in the cupcake batter to resemble a rose. The result is a wonderfully moist cinnamon cupcake with an apple topping. These cupcakes smell tempting when baking too!

When I showed these to the Chief Taster I received the double edged compliment of "I didn't know you could cook so elegantly".   If anyone needs him, he can be contacted on the sofa until further notice.

Before the keto police gather their pick forks, apples are not strictly keto at they are 11.4g net carbs per 100g. However, this recipe uses one apple and thinly slices it. Distributed between 6 cupcakes the whole recipe works out to be just 4g net carbs each cupcake.

Making the roses is as simple as placing the apple slices into the cupcake mixture and layering them within each other. Visual steps of how to do this is below.

The cupcake batter is an easy coconut flour recipe that I use. This recipe makes just 6 cupcakes so you may want to double the quantities if you want to bake a larger batch.

Slice the apple pieces as thin as you can for a delicate apple rose.

Lightly dust the apple slices in cinnamon before assembly for a stronger cinnamon taste.

Almond flour could be used in place of coconut flour. I would recommend the recipe for my strawberry muffins for the cupcake batter. Then add the apple slices. This cupcake recipe makes more cupcakes so you may need to adjust the quantities.

This recipe was originally posted in August 2016. I've updated the photos and content but the recipe remains the same. 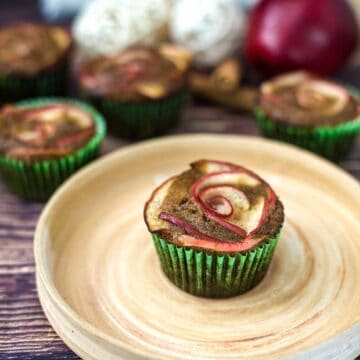 Makes 6 cupcakes The net carbs will be the total carb count minus the fibre count. Carb count excludes sugar alcohols. Any nutritional analysis on the website is based on an estimate, calculated by Spoonacular from the individual ingredients in each recipe. Variations may occur for various reasons, including product availability and food preparation. We make no representation or warranty of the accuracy of this information.

Serving: 1cupcakeCalories: 137kcalCarbohydrates: 7gProtein: 4gFat: 11gFiber: 3g
Have you tried this recipe? Leave a review or take a picture and share it on InstagramMention @Divalicious_Recipes or tag #divaliciousrecipes