This low carb apple crisp cheesecake is a delicious combination of crumble and cheesecake. The cheesecake is light and creamy, with a layer of mock apple which is topped with a cinnamon crumble.

The Chief Taster has never been happier with this dessert. Apple crumble is his favourite dessert, closely followed by cheesecake. There were lots of happy noises made as he devoured his first slice.

This low carb cheesecake may seem to have a lot of steps but it is worth the end result! The hardest thing about this cheesecake is waiting to eat it whilst it chills in the fridge. To serve I poured sugar free caramel sauce on top but that's optional.

How to make an apple crisp cheesecake

I’ve used the water bath method to bake this cheesecake as I did with my New York Cheesecake as it results in a great texture.  It is worth the wait!

For the apple layer I used chayote which is a member of the squash family. It's also known as christophine in the Caribbean. It makes a great low carb alternative to apples, just as zucchini does. It's firmer than zucchini so I prefer to cook it before use.

A low carb brown sweetener was used to compliment the mock apple and to give the cheesecake a slightly caramel flavour.

The making of the apple crisp cheesecake is in 4 stages: 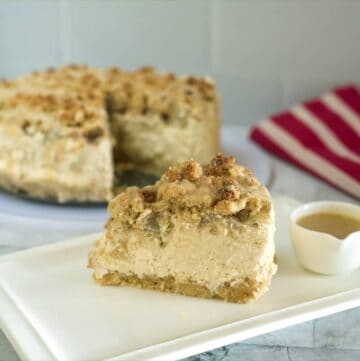 The net carbs will be the total carb count minus the fibre count. Carb count excludes sugar alcohols. Any nutritional analysis on the website is based on an estimate, calculated by http://nutritiondata.self.com from the individual ingredients in each recipe. Variations may occur for various reasons, including product availability and food preparation. We make no representation or warranty of the accuracy of this information

Serving: 1sliceCalories: 531kcalCarbohydrates: 11gProtein: 12gFat: 50gFiber: 5g
Have you tried this recipe? Leave a review or take a picture and share it on InstagramMention @Divalicious_Recipes or tag #divaliciousrecipes