Mexican Keto Flan is a creamy, delicious dessert. Made with a few simple ingredients, this custard-like flan is a tasty low carb, sugar-free and gluten-free that can be enjoyed by the whole family.

This is a creamy dessert that has almost a cheesecake taste and texture to it. With a sugar free caramel topping it's an easy low carb and gluten-free recipe to make.

The flan is baked with the sauce at the bottom then flipped over when cooled. It's fun to make as well as being delicious to eat.

Flan, or caramel custard, was created in Spain but is widely popular in the Caribbean and Latin America, particularly in Mexico. Traditional flan is made with eggs, evaporated milk or condensed milk. There can be different variations and flavours too.

Try this low carb version of the very traditional dessert, with an equally tasty texture. At just 5g net carbohydrates per generous serving too.

Mexican flan, also known as Flan de Queso is an easy dessert is made keto. Swap the sugar for a low carb sweetener and swap the evaporated milk with cream cheese and heavy whipping cream for a low carb flan.

We used two low carb sweeteners in this recipe. One for the caramelized topping, one for the flan. This is because we find that some sweetener can act differently when cooked as a syrup but you can try this your favourite low carb sweetener. Have aplay and see what works.

Whilst making the topping for the first time, we discovered that if you over cook the topping you end up with toffee which was a bonus! That will be used in another recipe. We ate it then made another batch of the caramel sauce being more careful not to overheat it.

How to make Mexican Keto Flan

The flan is make in two stages:

The flan is baked in a water bath giving the flan it's soft yet firm texture.

How To Make A Water Bath For Flan Recipe

We used a roasting tin for the water bath. The baking dish is place in the tin and hot water is poured into it up to about ¾ of the baking dish height.

When baking this sugar-free flan, don't be disturbed about a little jiggle in the middle. It's meant to be like this and will set once it is chilled in the fridge.

It's also the reason that I was more comfortable with using cream cheese in this flan recipe to ensure that the flan set and there would not be any disasters when the baking dish is turned upside down to serve.

We have used cream cheese which can be omitted and replaced with more cream but you can vary the flavours too. Try these:

What to serve with keto Mexican Cheese flan

The caramel sauce topping is a perfect sauce with this creamy dessert but serve it with sliced strawberries or blueberries. Sliced star fruit on top of the caramel sauce is a great addition too.

What dish do I use to make this?

We used a 7 inch ceramic casserole dish purely because that was the right shape but this can be made in individual ramekins. It should make 4 8oz ramekins. You will need to adjust the water level in the water bath.

How is the flan stored?

Just like a cheesecake, these flan needs to be stored in the refrigerator. Keep it covered and it should last up to about 4 days (although it didn't last a day in ours!)

Can I make this ahead of serving?

This is the perfect dessert to make ahead as it needs to be kept in the fridge overnight before serving.

This may be due to the oven temperature being too low or the flan not cooked long enough. 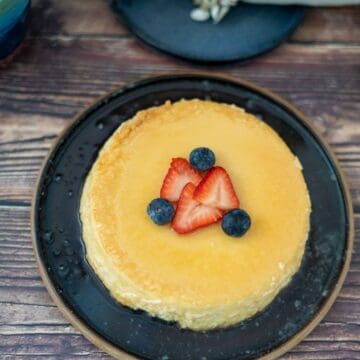 Makes 6 servings in a baking dish. The net carbs will be the total carb count minus the fibre count. Carb count excludes sugar alcohols. Any nutritional analysis on the website is based on an estimate, calculated by Spoonacular from the individual ingredients in each recipe. Variations may occur for various reasons, including product availability and food preparation. We make no representation or warranty of the accuracy of this information.

Serving: 1servingCalories: 356kcalCarbohydrates: 4gProtein: 9gFat: 47g
Have you tried this recipe? Leave a review or take a picture and share it on InstagramMention @Divalicious_Recipes or tag #divaliciousrecipes