A keto key lime cheesecake that is set in a coconut crust makes a luscious dessert.   A great low carb and gluten free dessert for summer.

As a homage to the key lime pie, I used a 9-inch pie dish to make this cheesecake.  When it was complete I rather liked the look of it and would use the dish again to make a coconut crusted cheesecake.   If you want to stick with a spring form cake tin I would use an 8 inch one.

Since I made my coconut blueberry cheesecake I have been enjoying a coconut shell for a few desserts.  It’s such a delectable alternative to low carb flour crusts and gives a chewy texture too.    When I came across the rare occurrence of key lime in the supermarket the combination of coconut and cheesecake called me like a siren.

This key lime cheesecake is surprisingly light, yet creamy.  It may have been how I whisked the filling but even a friend who is not keen on sweet desserts enjoyed a piece.  I had to give the cheesecake away since the Chief Taster was away and once I tasted a slice I knew that I could not be trusted alone with the key lime cheesecake.  I would have eaten it for breakfast, lunch and dinner.

For the filling I only used a quarter of a cup, purely as I wanted the tartness of the key lime flavour to come through as a contrast to the coconut.  I would recommend you taste test the filling, so you can adjust for your own sweet tooth.  Call it a great excuse to enjoy a couple of large spoons of the filling.

I was cruel and sent the Chief Taster photos of this whilst he was away, so I will have to make this key lime cheesecake again when he returns.  It is also a great excuse to have another piece as the memory of that creamy filling against the cheesecake still lingers with me.


OTHER CITRUS DESSERTS TO TRY: 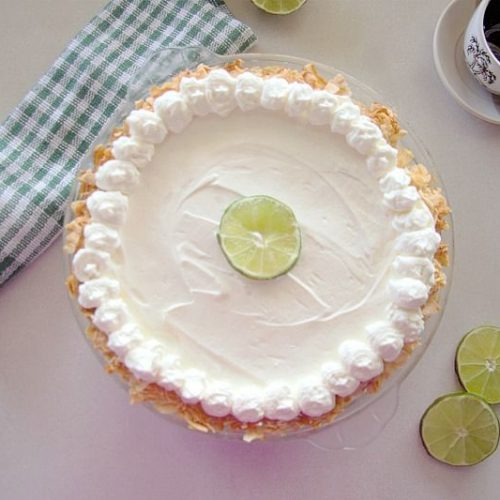 Serves 10 slices: Nutritional Info per slice:  316 calories, 32g Fat, 4g Protein, 6g Total Carb, 3g Fibre, 3g Net Carbs Any nutritional analysis on the website is based on an estimate, calculated by http://nutritiondata.self.com from the individual ingredients in each recipe. Variations may occur for various reasons, including product availability and food preparation. We make no representation or warranty of the accuracy of this information.

Serving: 1SliceCalories: 316kcalCarbohydrates: 6gProtein: 4gFat: 32gFiber: 3g
Have you tried this recipe? Leave a review or take a picture and share it on InstagramMention @Divalicious_Recipes or tag #divaliciousrecipes