Enjoy these cinnamon roll blondies for a keto dessert. Low carb blondies are baked with a sweet cinnamon swirl and then drizzled with a cream cheese icing.

An easy keto blondie that is sugar free and gluten free.  Serve for breakfast, dessert or a snack, they are a must for cinnamon lovers. If you enjoy a cinnamon bun, then these version of a brownie should be on your "to bake" list.

Blondies are a pale version of a brownie. They are essentially the same as a brownie recipe but with no cocoa or chocolate. They are still as rich and delicious but these have the addition of cinnamon for a great alternative to a low carb cinnamon bun. I have another keto blondie recipe with coconut which is delicious. Try it and add chocolate chips to it!

These rich and buttery blondies need just a few ingredients:

I used regular erythritol but replace this with brown erythritol for extra flavour. Or try a monk fruit blend of sweetener.

The coconut flour can be substituted with almond flour. Use about 1 ½ cups of almond flour and decrease the eggs to 3. 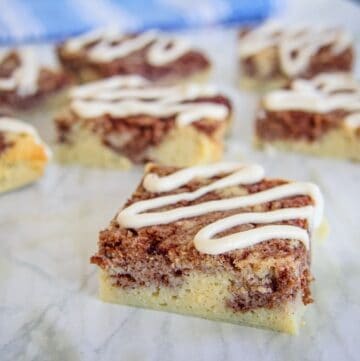 Makes 9 squares The net carbs will be the total carb count minus the fibre count. Carb count excludes sugar alcohols. Any nutritional analysis on the website is based on an estimate, calculated by http://nutritiondata.self.com from the individual ingredients in each recipe. Variations may occur for various reasons, including product availability and food preparation. We make no representation or warranty of the accuracy of this information.