My take on the classic Eggplant Parmesan recipe has layers of eggplant, low carb Marinara sauce and an added ingredient of goats cheese for extra flavour.

This baked Eggplant Parmesan recipe is delicious warm and I think, better cold the next day.   I do actually prefer this cold the next day with a salad.  However, the big problem is not eating it all once it is out of the oven.

The addition of the goats cheese gives this baked eggplant Parmesan dish an added layer of flavour.   Since this recipe was originally my 200th post back in 2011, I am not sure why I added this to it, but I'm glad I did.  It was now time to revisit this recipe and take better photos.

I had forgotten how much I enjoy this baked eggplant Parmesan and it too a LOT of self control not to eat the whole dish before the Chief Taster came home that day.  During my second helping I did ponder on whether I could make something else for him, just so I could have this all to myself.  Perhaps tell him I had just had a salad that day and I was laying on the sofa, unable to move because I had exerted myself cooking his dinner.  It did cross my mind.

How to Make Eggplant Parmesan

Eggplant slices are coated with a mix of oregano and almond flour.  I used a low carb Marinara sauce but did not drown the eggplant slices in it.  As the dish cooks with the bubbling cheese, the sauce spreads and I wanted to be able to cut clear slices without too much sauce oozing out.

For this recipe I cut the eggplant slices into circular rounds rather than long strips. It doesn't make any difference which way you slice the eggplant but the circles were easier to cut and serve. You could overlap them as you are assembling the layers too. If you want a chunky sliced section when serving, then use strips. If you want something that is easier to remove from the pan, try circles. 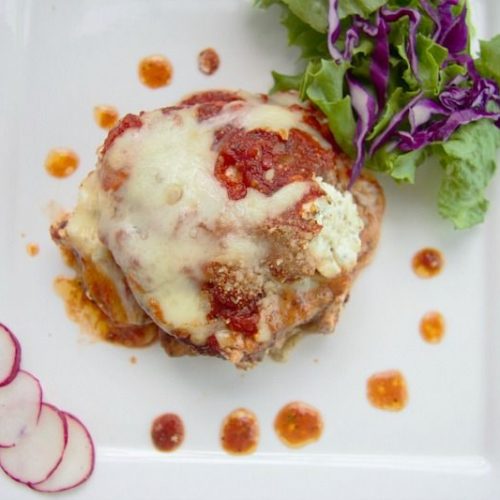 Serves 4 at 10g net carbs per serving The net carbs will be the total carb count minus the fibre count. Carb count excludes sugar alcohols. Any nutritional analysis on the website is based on an estimate, calculated by http://nutritiondata.self.com from the individual ingredients in each recipe. Variations may occur for various reasons, including product availability and food preparation. We make no representation or warranty of the accuracy of this information

Serving: 1ServingCalories: 508kcalCarbohydrates: 16gProtein: 22gFat: 41gFiber: 6g
Have you tried this recipe? Leave a review or take a picture and share it on InstagramMention @Divalicious_Recipes or tag #divaliciousrecipes
You Might Also Like
Chocolate Pecan Torte