This peanut flour cake is so good that no-one would think that it’s gluten free and low in carbs too.

I have seen tubs of peanut flour (powder) in various health food stores but since it is usually marketed as a powder to have with a smoothie, I walk past it.  A couple of weeks ago, there was a large display of peanut flour in our version of Costco and the price was so good that I had to buy a tub to have a play around with it.  Plus, when I saw the carb content it seemed rude not too!  One serving (two tablespoons) has 5g total carbs, 2g fibre and 3g net carbs.

What is peanut flour used for?

Peanut flour is simply peanuts that have been pressed to remove the oils and fats, then ground into a flour.  Something for those of you who steer clear of peanut butter because of high fats or calories.  Peanut powder is for you! I doubt that you could make this at home because if you grind up peanuts in your food processor, the heat and oils turns the peanuts into butter.

As a comparison, 2 tablespoons of peanut butter have 190 calories and 16g fat.  Peanut powder/flour has 45 calories and 1.5g fat.   However, I was lured by the low carbs and it being gluten free.

I have used peanut flour for a few peanut flour recipes. To date, I have made pancakes, coated chicken with it, added it to my iced coffee, baked muffins and best of all, this delicious peanut flour cake. Also, if you add water to the powder you get instant peanut butter!  Very useful for when the dogs needed a treat.  The pancakes are delicious and will eventually be published when I can take some decent photos.  Or make some without the Chief Taster about, that way they will make it to a plate to be photographed!

The cake batter for this recipe is so good that I happily scrapped the bowl with a spoon and ate the batter remains with a fearless zeal, for I do not fear raw eggs when it’s cake batter!  I never really do that but this is the best cake batter I’ve made for a while.  I must now resist eating it all with a large spoon when I make it.

The sponge reminds me of a treacle pudding in texture.  I've called it a cake but it's almost a pudding too and is just delicious served with a side of cream.  I did make a version with two squares of chocolate pushed into the batter before baking but that upped the carbs.  It was delicious though.   If you were not watching the carbs a sliced banana at the bottom of this would be heavenly.   After breaking the Chief Taster’s heart after chatting about how good it would be with bananas, but no, I was not going to use them, we had a debate about what berries would go with this instead.  Since I didn’t have any in the fridge it was a waste of a debate but it diverted him from “banana-gate”.  I think I’d like to try this with raspberries and must remember to get some on the next shopping jaunt.  Any excuse to make this again.

I made this one Sunday and the chief taster ate both for what he called brunch.  It’s his new pudding addiction.  I’m not looking forward to the cold turkey ahead when the store sells out of these as it’s not normally a regular item there.    You can purchase this from health stores or via Amazon though.  Or direct from the suppliers.   I shall be looking out for this around the island now. 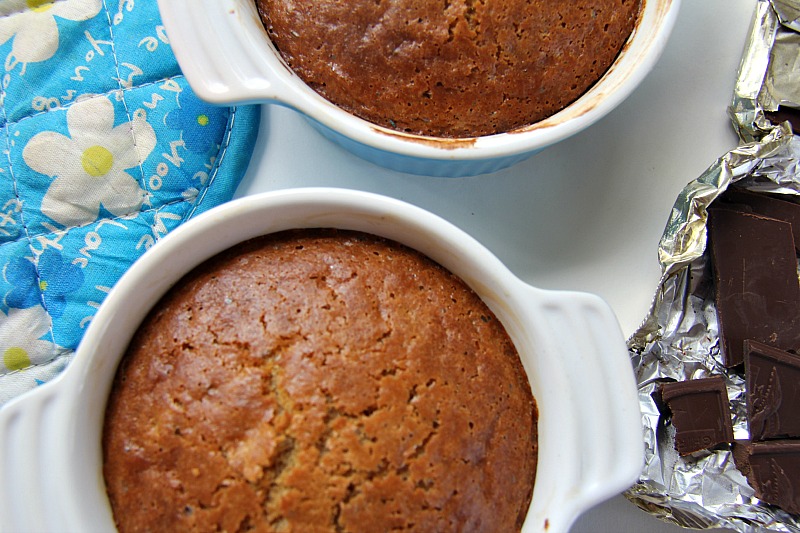 Angela Coleby
This peanut flour cake is so good that no-one would think that it’s gluten free and low in carbs too.
4.67 from 3 votes
Print Recipe Pin Recipe
Servings 2 People