These peanut flour donuts are very light and “donut like”.   They are very moist and the best low carb and gluten free donut I’ve baked to date.

It has been a while since I have baked any donuts and most of mine are made with coconut flour.  So, I thought that I would try a batch with peanut flour since the Chief Taster always loves the results that peanut flour yields.  As I was greasing up the tin I was laughing to myself that who are we kidding calling these donuts.  Aren’t they just a baked cake in a donut shape?   A donut is made with a yeasty dough and deep fried.  That taste surely cannot be really replicated.  My first bite into one of these peanut flour donuts made me eat my words.  Then I had another bite of the donut just to make sure.     Once the Chief Taster got his hands on them, it was everyone for themselves!

I made two batches of these peanut flour donuts with one being plain peanut flour and the other had cocoa powder added to it.   Both were delicious and we didn’t have a favourite between us.  They are equally as yummy as each other.  Next time I might try a marbled flavour to combine the best of both peanut flour donuts together.

These peanut flour donuts were dipped in a mixture of melted chocolate, coconut oil and cream cheese.  Then a few sprinkles of grated chocolate were added for decoration.  The topping is up to you but I recommend it!  If you wanted to keep the carbs down then replace the chocolate with cocoa powder.  Or you could glaze them with a simple topping of melted coconut oil with cocoa powder.

Unbelievably, a few peanut flour donuts made it through to the next morning.  They kept well in the fridge and made a delicious morning snack.   Reach for that donut tin and make yourself a batch of healthier donuts! 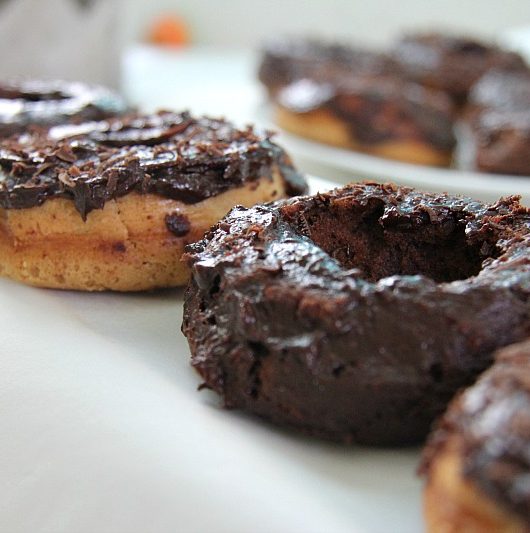