These delicious cinnamon slices are a great low carb and gluten-free afternoon treat.  Or just as good for breakfast as the Chief Taster informed me, as he ignored my offer of breakfast eggs and scoffed a couple of these with his coffee.

This was my very first bake in the oven of our new house.  I had been eyeing up the oven with an element of distrust for a week as it's not as large as my previous one.  Which, although was great for a mega baking and roasting session was not level.  That meant remembering to turn the bakes around half way through to ensure everything was even.

The oven in our new house is a smaller built-in one, with a separate gas hob.   It was very clean and suggested that the previous tenants did not use it much.   We had a small oven in the first place we lived in Barbados which was my worst nightmare as it was not really meant for baking but heating up.  It was more of an adult easy oven and took twice as long as it should to bake.   I'm still in therapy about the time I tried to roast a medium turkey in one day.  So, given my experiences with a small oven I did not have high hopes.   I finally reached for a baking tin and tried these cinnamon slices to see how the oven was going to perform.  The test run went well, I gave a sigh of relief and can start planning baking recipes galore!

As I was munching on them, I could not help but think that these would be lovely with apple in them.  Apple and cinnamon go very well together and perhaps you could slice an apple thinly, dust the slices in cinnamon and layer then on top of the cake mixture before baking.   Or even in the middle for a delicious surprise.   It would up the carb content so I'll let that decision be down to you.

If you are are a cinnamon lover and want another great tasting low carb cinnamon dessert with your morning coffee, then try a couple of keto cinnamon rolls .

If you enjoy these cinnamon slices, try these other cinnamon desserts 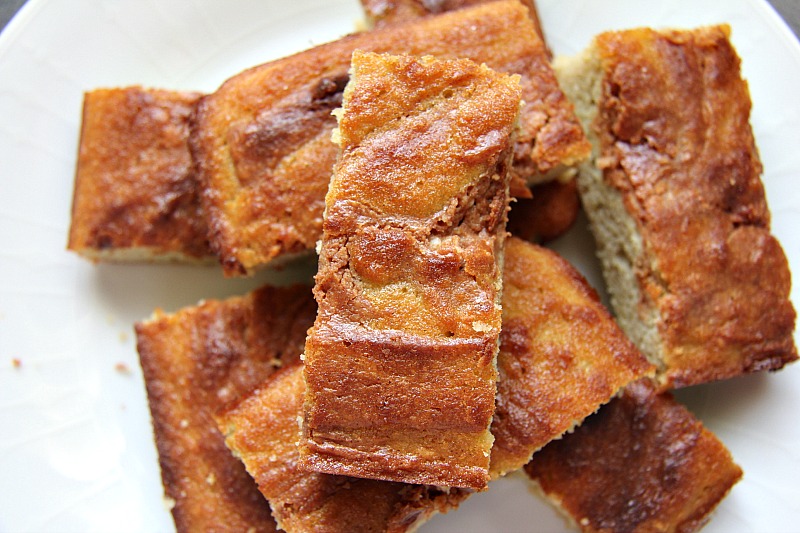 Serving: 1sliceCalories: 234kcalCarbohydrates: 7gProtein: 6gFat: 20gFiber: 4g
Have you tried this recipe? Leave a review or take a picture and share it on InstagramMention @Divalicious_Recipes or tag #divaliciousrecipes