A smooth creamy ice cream flavoured with cinnamon is a must for cinnamon lovers.   The warm spice makes this low carb ice cream a great dessert.  It’s almost an ice cream version of apple pie, without the apple.

Although I used my ice cream maker for this, it can be made without one too.  To be honest, I was not too happy with the ice cream churning as the texture so like a soft serve ice cream and I wanted it a bit harder.  So, I popped the cinnamon ice cream into the freezer and finished it there.

There is a great ice cream shop in St Lucia that I pop into to look at their range of flavours.  They have a couple of sugar free flavours too which I enjoy and makes sure I don’t stray down the sugar path.  They change their flavours regularly and have some great flavours during holidays. The rum punch one will be forever in my memory.  When I saw the cinnamon ice cream, I had to have a taste.   My taste-buds did a happy dance and off I went home to make a low carb version.

For this cinnamon ice cream, I simply used ground cinnamon.   You could perhaps add a cinnamon stick to the cream as you are heating it, but I thought that it would be a lot easier just to use ground cinnamon. 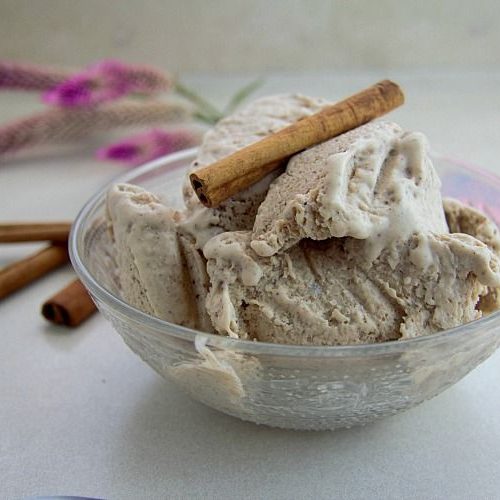 Makes 8 Servings Nutritional Info per serving:  182 Calories, 19g Fat, 2g Protein, 3g Total Carbs, 1g Fibre, 2g Net Carbs Any nutritional analysis on the website is based on an estimate, calculated by http://nutritiondata.self.com from the individual ingredients in each recipe. Variations may occur for various reasons, including product availability and food preparation. We make no representation or warranty of the accuracy of this information

Serving: 1servingCalories: 182kcalCarbohydrates: 3gProtein: 2gFat: 19gFiber: 1g
Have you tried this recipe? Leave a review or take a picture and share it on InstagramMention @Divalicious_Recipes or tag #divaliciousrecipes