A keto blueberry cheesecake that is rich and creamy with a jelly blueberry topping. The crust is a delicious low carb crust made with cream cheese but as firm as a biscuit base.

I’ve made this cheesecake crust before with almond flour but thought it was time to give coconut flour an airing. An egg was added since coconut flour is moisture heavy and needs all the help it can get. I didn’t want a dry base as that can ruin a cheesecake. Which is sacrilege in the world of cheesecakes.

I wanted a topping to the blueberry cheesecake but since a cream or chocolate topping did not seem right, I thought a solid jelly topping would work. The Chief taster gave this blueberry cheesecake topping a thumbs up and declared it a proper cheesecake. After the intense grilling he was subsequently given on that phrase after the countless cheesecakes I’ve made, he enjoyed that week on the sofa.

How to make keto blueberry cheesecake

Once firm, the topping gives another layer of texture to the cheesecake. You have the soft but firm base, the creamy cheesecake with a delicious jelly topping. This is something that I would happily repeat with another berry.
Being a brave man that he is, a rare comment was uttered by the Chief Taster. He found this a bit sweet. I’ve even finally kicked his famous sweet tooth to the curb as I didn’t think the same. Perhaps you should add half of the sugar, then taste test the cheesecake mixture to see whether you are in Chief Taster camp or Divalicious camp. He still happily munched slices of it though and I didn’t see anyone twisting his arm as he strolled off to the fridge with a fork in his hand.

There is something wonderfully colourful about blueberries. The blue becomes almost a purple in colour when blended and cooked. To confess, I was trying to blend the blueberries in different shades and levels of the cheesecake. But when that didn’t work, I just swirled it in all together.

So, if you have surplus of blueberries in your kitchen or they are on special offer in the supermarket, then whip up a delicious creamy cheesecake. The bottom is particular delicious too. 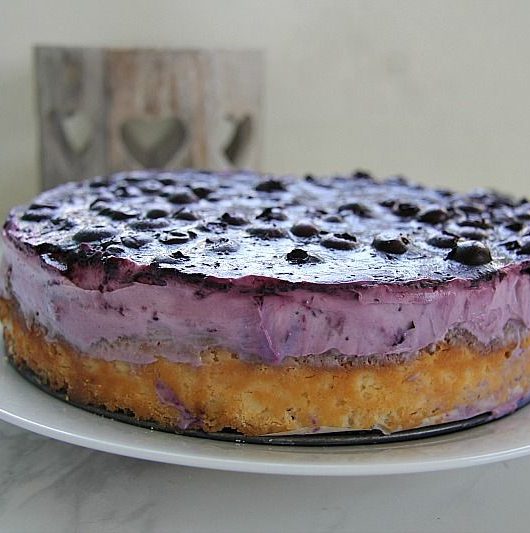