This is a delicious chia pudding dish made with apples and cinnamon that makes a great breakfast or dessert.  Or even a snack.

One of our supermarkets often has marked down products and I saw a packet of frozen apples at such a marked down price that it would have been criminal not to pop them into my shopping trolley.   I love the flavour combination of apple and cinnamon so thought I would make a chia pudding with the apples to make a delicious breakfast.

One of the best things about a chia pudding is that you can make it the night before and then grab a healthy breakfast if you are in a rush or just can't face cooking first thing in the morning.   The chia pudding will keep you full and satisfied all morning too!  Just make sure you also drink plenty of water too.

I did not add any sweetener to this dish as I found that the vanilla extract gave it enough sweetness for my taste.  However, my tastes for sweetener may be lower than yours, so taste and adjust for your own dish.

Coconut would be a nice addition to this dish too.  I might try that the next time. 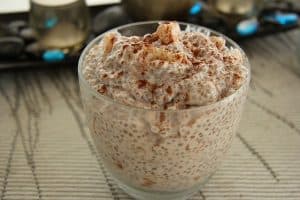 Nutritional Info per half - 232 Calories, 28g Fat, 17g Total Carbs, 10g Net Carbs, 7g Fibre, 7g Protein
Have you tried this recipe? Leave a review or take a picture and share it on InstagramMention @Divalicious_Recipes or tag #divaliciousrecipes