A roasted asparagus red pepper frittata that is baked in the oven.  Perfect for a summer lunch or a picnic.

This asparagus pepper frittata is colourful as well as tasty.  The roasted asparagus and sweet roasted red pepper add a depth of flavour that balances each other.  I used two gratin dishes to bake these as a change from using the frying pan.   As well as looking pretty, it was nice to have my own mini frittata rather than cutting a quarter from a frying pan.

My first attempt with this asparagus pepper frittata was cooked in a frying pan but I was not happy with the outcome.  Annoyed with myself that I could not cook a basic frittata I reached for the wine and reviewed my work.  I had lightly boiled the asparagus and used ready roasted peppers.  On paper this should have been a tasty dish but it was lacking a little something.  The feta I added didn’t really lift the dish either.

With the wine finished, I finished sobbing, dried my eyes and moved onto my second attempt.  This time I roasted both the asparagus and red pepper together.   As I removed them from the oven I was more confident about the frittata.  Roasting brings out a better flavour of the asparagus and the smells were tempting.  The Feta cheese was out and I brought in grated Parmesan for the frittata.

I had been going through my cupboards and found two gratin dishes which I thought would be cute for a frittata.  I added some garlic and spring onions to the vegetables and voila!  The second frittata was just perfect.  Firm, tasty and colourful.  It made a great lunch along with some salad and tasty coleslaw.   The size is just perfect for one person and makes a great lunch as well as a delicious picnic dish. 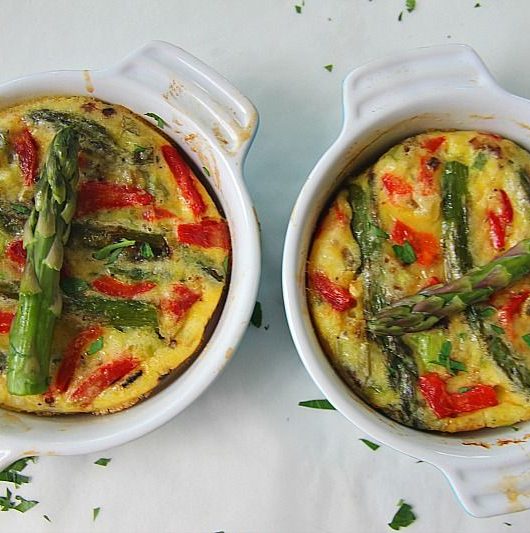