Behold my peanut butter cheesecake with a chocolate brownie recipe.    A winning combination of both cheesecake and brownie.

When baking a low carb and gluten free cheesecake you need to find a delicious alternative to the crushed biscuits that are used in the unhealthier versions.  I often used ground nuts for a crunch crumb base but had been thinking about using a brownie for a base.  Since peanut butter goes so well with chocolate it seemed the obvious choice for the cheesecake topping.

Before I reach for the mixing bowls and switch the oven on, I have an image in my mind how I want the recipe to work out.  This was one of those recipes that did not disappoint and made me grin as I held it lovingly in my hands. The peanut butter brownie cheesecake is a no bake cheesecake so you need to be patient.  I left the cheesecake in the fridge overnight, then decorated it with some melted chocolate as I waved it under the Chief Taster’s nose for admiration.

This peanut butter cheesecake with a brownie crust has gone right into the top 3 cheesecake recipes in our house.  The Chief Taster will always complain if the base is not thick enough on a cheesecake.  By using a brownie base, these moans were melted away.

I had plans of cutting this peanut butter cheesecake into slices and freezing it, as I thought it would be too much for us to eat over a couple of days.  Who was I kidding?  I forgot that cheesecake makes a delicious weekend breakfast and did not account for the Chief Taster bearing down upon the cheesecake with a fork in his hand and a glint in his eye.  Is eating with intent an offence?  My cheesecake would like to press charges.

Although I normally estimate a cheesecake to be 8 slices, this will definitely be a 10-slice cheesecake due to the peanut butter cheesecake being fairly rich.  A small slice will be enough to delight your taste buds with the coconut flour chocolate brownie base being filling and satisfying.   Brownie and cheesecake are a winning combination and will definitely appear in another recipe later this year. 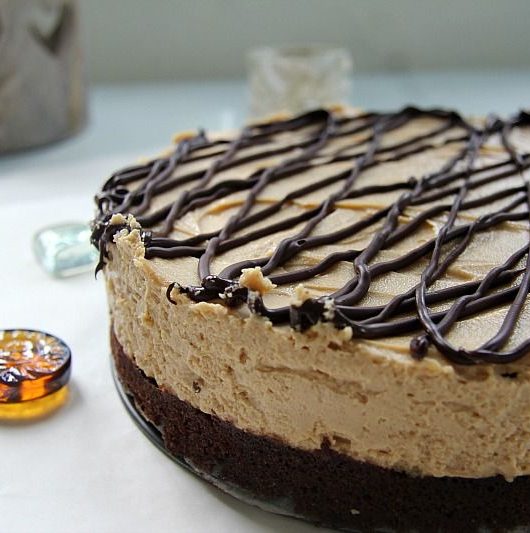 Make the brownie base

Makes 10 slices Nutritional Info per slice – 513 calories, 47g Fat, 16g Protein, 12g Total Carbs, 5g Fibre, 7g Net Carbs Any nutritional analysis on the website is based on an estimate, calculated by http://nutritiondata.self.com from the individual ingredients in each recipe. Variations may occur for various reasons, including product availability and food preparation. We make no representation or warranty of the accuracy of this information

Serving: 1SliceCalories: 513kcalCarbohydrates: 12gProtein: 16gFat: 47gFiber: 5g
Have you tried this recipe? Leave a review or take a picture and share it on InstagramMention @Divalicious_Recipes or tag #divaliciousrecipes