A vanilla muffin with a creamy cinnamon swirl in the middle.   Deliciously simple and low in carbs as well as being gluten free.  I've used almond flour here for a change from my usual coconut flour.

Weeping tears of joy, I have found bags of almond flour half the price I used to pay.  The same supplier though, just that the government here do not impose the ridiculously high import taxes as Barbados.   Don't get me wrong, there are still import taxes that make living on a Caribbean island expensive but suddenly they are no longer a luxury.   I've been skipping round the various supermarkets without my usual loud swearing at the prices and wanting to hug the Dutch for their love of cheese.

I usually make my own almond flour as that is so much cheaper but this time I purchased a bag of almond flour from a great health food store.   It's always good to support local businesses and they do coconut flour too!  I've already got my shopping reward card and expect a calendar from them this time next year!

Almond flour probably makes a better muffin than coconut flour as you get the large muffin tops as you can see from the pictures.   I love cinnamon and was thinking about making a muffin with a cinnamon swirl, rather like a cinnamon bun.   However, when I thought about piping a cinnamon butter mixture into the muffin or mixing in it with a knife didn't think it would work.  So I added cream cheese to the cinnamon mixture and was very happy with the results.

So was the Chief Taster.   He happily munched on these and exclaimed that these could not be coconut flour.   With a raised eyebrow and ready to throw my spatula at him if he dared to criticize my beloved coconut flour, I asked why.   At a safe distance, he replied that the texture was lighter and fluffier.  More like a store bought muffin and he loved the vanilla and cinnamon.   Almond flour does give a lighter texture and I shall be back playing around with this.

Instead of piping a swirl you could simply pipe or spoon the cinnamon mixture into the muffin for a filling.  That would be just as delicious!  I used a medium sized nozzle but if you had a thinner one it may give a more extra swirl.   I still need to work on my piping skills... 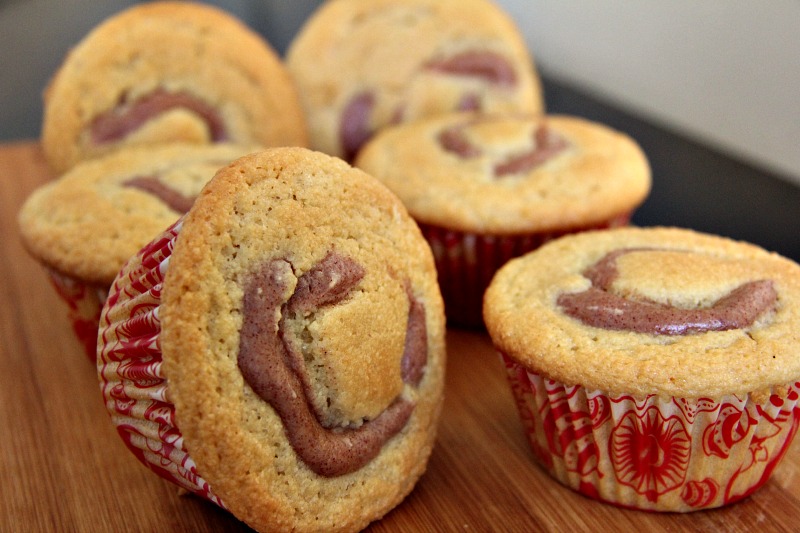 Makes 9 Muffins Nutritional Info per muffin – 255 Calories, 24g Fat, 8g Protein, 6g Total Carbs, 3g Fibre, 3g Net Carbs Any nutritional analysis on the website is based on an estimate, calculated by http://nutritiondata.self.com from the individual ingredients in each recipe. Variations may occur for various reasons, including product availability and food preparation. We make no representation or warranty of the accuracy of this information.

Serving: 1MuffinCalories: 255kcalCarbohydrates: 6gProtein: 8gFat: 24gFiber: 3g
Have you tried this recipe? Leave a review or take a picture and share it on InstagramMention @Divalicious_Recipes or tag #divaliciousrecipes