This Caribbean spiced pumpkin dish is a delicious blend of aromatic spices with a touch of heat.

Caribbean pumpkin is also known as Calabaza and is similar to the pumpkin grown in the USA.  It's large, with a thick skin and has a bright orange flesh.  Calabaza is sold by the chunk in our local market and in the stores.  At the vegetable market you can pick the size you want whilst the vendor wields his machete knife and cuts it up. Never argue with a man holding a machete! (Actually, he is very nice and could well as be holding a butter knife!).

I often purchase a chunk of pumpkin to add to the dogs food that I make.  Of course my dogs get home made food and nothing out of a can.  I also bake pumpkin doggie cookies with coconut flour for them.  They are my little four legged Diva's!   However, it was time I used the pumpkin in a dish for us and I thought that I would try a simple one pot dish and use Caribbean spices with it.  It was delicious with the smooth, sweetness of the pumpkin paring so well with the spices.  If you want a little less heat than avoid the scotch bonnet pepper and swap it for a milder one, like a jalapeno.  Perhaps halve the ginger too.

If you accidentally overcook the pumpkin and it goes a bit too soft, then just puree it and make it into a soup.  This is a great hearty one pot dish by itself.   You could serve it with a side of cauliflower rice too.

Not only is pumpkin rich in antioxidants and beta carotene, it’s very low in calories, and a very good source of dietary fibre.  So reach for a large spoon and have another serving!   This seems to improve the next day too.  We had leftovers so I stored it in the fridge.  The next day I had it for lunch and it seemed even better than before! Although I could have missed breakfast and been extra hungry that day! 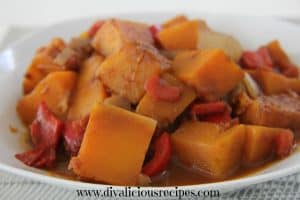 Serves 4
Nutritional Info per serving : 119 Calories, 7g Fat, 2g Protein, 14g Total Carbs, 4g Fibre, 10g Net Carbs
Have you tried this recipe? Leave a review or take a picture and share it on InstagramMention @Divalicious_Recipes or tag #divaliciousrecipes
You Might Also Like
Baked Ratatouille