An easy red pepper dip that is full of flavour and could be used as a spread too.  A welcome low carb and gluten free at any gathering.

This was described as "morish" by the Chief Taster as he tucked into a bowl of this last night.  Red peppers are full of colour and have a sweet taste.  I love the flavour that they give when roasted too.   Here they are used to make a creamy dip that can be enjoyed with crudites, cheese crisps and grain free crackers.

You could always cheat with the peppers and use the ones from the deli counter or sold in a jar.  Just blitz with the other ingredients and you have a tasty dip quick! 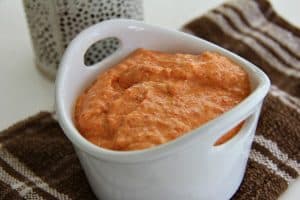 Have you tried this recipe? Leave a review or take a picture and share it on InstagramMention @Divalicious_Recipes or tag #divaliciousrecipes