This low carb sub sandwich recipe is high in fibre and very filling. It is very easy to make and is gluten free and grain free too.

The submarine sandwich has many different names such as hoagie, sub, wedge or Italian sandwich. Many names, but it’s still the same thing. A long bread roll used as a sandwich.

I was not happy with my first attempt as it was very heavy. So, for the next attempt, I separated the eggs, whisked up the egg whites and this seemed to help the texture. It’s not going to get those lovely air bubbles as you would a Ciabatta bread, but this is still a great low carb sandwich alternative. This was much better and it gave me the sub sandwich that I was hankering after.

When you are moulding the dough recipe into sub sandwich shapes it may be a bit sticky but don’t be too alarmed. Think of it as gooey playdough and just fashion it into its shape. When it is cooking, the dough should rise quite a bit as you would get with a yeast dough. It will deflate a little bit but should not collapse too much. If the dough does not seem to be quite as firm as you want after 30 minutes, give it another 5 minutes in the oven. Ovens can vary and I often eye mine up with suspicion.

I found this low carb sub sandwich recipe to be very filling. Admittedly, my first few attempts were baked into 2 subs, not 4 as this recipe states. I had one for lunch and could not eat anything else that day. It was so filling and I had to reduce the mixture down to 4 subs to stop the afternoon naps on the sofa after consuming one.

I’m fairly sure that you could adapt this recipe with almond flour if you did not want to use coconut flour. Although I would use about one cup of almond flour instead and perhaps reduce the eggs to four.

The Chief Taster enjoyed this once I slathered it cheese and melted it under the grill. His usual suspicious of flaxseed were alerted though despite the whole recipe only having 2 tablespoons of flaxseed in it. I think he saw the bag of flaxseed flour on the kitchen counter when I was making a batch of these sub sandwiches and he went into a panic mode. The flavour of flaxseed is not that strong in this recipe and I think it gives a more wholemeal texture to the recipe.

Whether you choose to simply fill this with a sandwich filling or use it for a slice of garlic cheese bread, this is a great gluten free and low carb sub sandwich recipe. It's the base for my cheesy olive bread recipe too. I have a couple in the fridge that I shall be munching on for lunch. My afternoon nap should then commence about an hour later!

WATCH THE VIDEO OF THE RECIPE 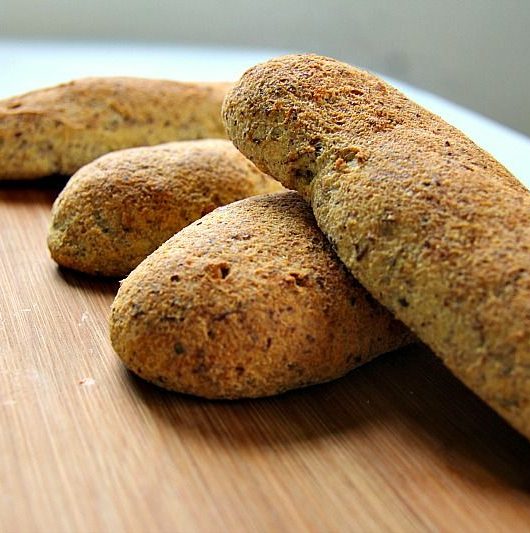 Makes 4 subs Nutritional Info per sub – 256Calories, 16g Fat, 10g Protein, Total Carbs 17g, Fibre 11g, Net Carbs 6g Any nutritional analysis on the website is based on an estimate, calculated by http://nutritiondata.self.com from the individual ingredients in each recipe. Variations may occur for various reasons, including product availability and food preparation. We make no representation or warranty of the accuracy of this information.

Serving: 1SubCalories: 256kcalCarbohydrates: 17gProtein: 10gFat: 16gFiber: 11g
Have you tried this recipe? Leave a review or take a picture and share it on InstagramMention @Divalicious_Recipes or tag #divaliciousrecipes