These keto mince pies are a treat you can enjoy during the festive period! They’re low carb, gluten-free, simple to make and are the perfect accompaniment to your lunchtime coffee.

Keto mince pies are a traditional pie full of fruits and spices. This recipe uses a sugar substitute instead of sugar. These spiced fruit minced pies taste as good as the real thing and are full of Christmas flavor.

We have made mini pies as the coconut flour pastry can be delicate. All you need is a couple of bites of this tasty treat to be satisfied.

What is a Mince Pie?

In the 19th and early 20th centuries, mince pies were traditional British Christmas delicacies. The filling used to be a sweet meat filling in a suet case but now the mince meat is a mixture of dried fruits, sugar, spices in a pastry case. Today, the pies remain popular at Christmas and occasionally at other times of the year in some parts of the country.

Mince pies are a popular British treat left out for Santa and are enjoyed throughout Christmas, served warm or cold.

Are Mince Pies High in Carbs?

Traditional mince pies are high in carbs as they are made with white flour, sugar and high carb dried fruit.

For this low carb recipe we are using dried low carb berries and using low carb fruit. An apple sneaked it's way into the recipe as it's spread out between 20 servings and spreads the carbs out. These mini mince pies are just 3g net carbs each. They are great diabetic mince pies for the holiday.

The spice mixture can be adjusted to your own taste and the spices tweaked.

For our low carb Christmas mince pies we have used a coconut flour pie crust that we have used for other recipes such as our mini pecan pie tarts.

The smell of the mincemeat filling is divine and fills your kitchen with holiday scents.

Peel and chop the zucchini and the apple

We found that half this recipe made enough filling for this mince pie recipe. Bake another batch or store it in the fridge for a couple of weeks.

Mini mince pies are a good choice for this low carb pastry as it can be very delicate to handle.

Place the ingredients in a food processor

Run the processor until you have a dough

Place the dough in the fridge to chill for 30 minutes

Cut out stars for the pie topping

Place the star shapes on top of the pies and bake

Keep these low carb mince pies in the fridge in airtight container and they will last up to 4-5 days.

Don't miss out on holiday treats with these low carb Christmas recipes: 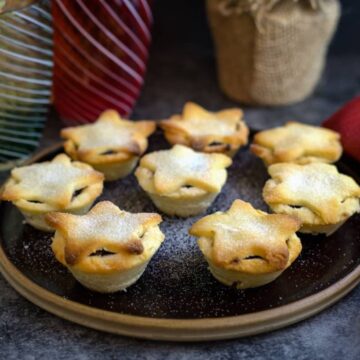 Makes 20 mini pies The net carbs will be the total carb count minus the fibre count. Carb count excludes sugar alcohols. Any nutritional analysis on the website is based on an estimate, calculated by Spoonacular from the individual ingredients in each recipe. Variations may occur for various reasons, including product availability and food preparation. We make no representation or warranty of the accuracy of this information.

Serving: 1mini pieCalories: 133kcalCarbohydrates: 6gProtein: 2gFat: 11gFiber: 3g
Have you tried this recipe? Leave a review or take a picture and share it on InstagramMention @Divalicious_Recipes or tag #divaliciousrecipes