Almond meal pulp and zucchini falafels are a great way to use up left over almond meal.

I like to make my own almond milk as that way I know that there has been nothing unnatural sneaked it but it hurts me to throw away the left over almond meal.   I tried to make a cracker with it which did not work out well.   I would rather lick the conveyor belt at the supermarket then eat those again (not every recipe is a success!).

Finally,  I made a lovely savoury dish from the almond meal so it's not gone to waste.  I am also missing a decent falafel since moving away from the Middle East, and this was a half decent substitute (you still cannot beat the real thing).  More importantly for me, it is a great low carb version of falafel.  Perfect with a cauliflower wrap and salad.  It works out to be about 2 net carbs per falafel.  Nom nom!

The added zucchini gives the falafel the moistness you normally get from the chickpeas when you are making the traditional version with chickpeas.  As ever, it's a great way to sneak vegetables into a dish!  More importantly, a tasty way to use up the almond meal from home made almond milk!  I'm still unsure how to categorize these, a vegetarian side dish, main or a snack?   I eat them in all three categories!

You can make a low carb falafel from cauliflower too. Try this cauliflower falafel recipe too. 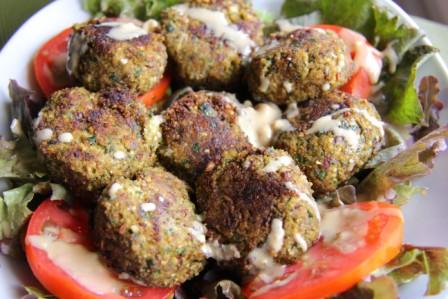