A rich chocolate blackberry pudding baked with coconut flour. This low carb and gluten free pudding is easy to make and only takes 30 minutes to bake. Served with cream or a sugar free berry coulis, it makes a delicious dessert.

Initially, I had plans to make a simple chocolate pudding but during my weekly shop fresh blackberries were at crazy not to buy them low price. The blackberries are not yet in season either so still a bit mystified why the price was low. Especially as most produce is flown into the island and you only see a price fluctuation on seasonal produce.

I miss those hazy end of summer, beginning of Autumn days as a child where we would take our empty ice cream tubs off to the overgrown hedgerows where blackberries were in abundance. We would pick fresh blackberries until all the containers were full and most of them would be frozen ready for fruit pies and crumbles. Mind you, blackberry picking can have its dangers as they are a bramble and have sharp thorns that you need to avoid. Now I look at a carton with about 20 blackberries in them and wonder where the rest went.

I usually think of blackberries being paired with apple in pie or crumble form. Or perhaps with lemon in a cake. Since I was already making a chocolate pudding I thought that I would try baking it with a few blackberries. I made the chocolate blackberry pudding sweet enough to contrast against the acidic tartness of the berry. The baked blackberry does go well with chocolate and I am now thinking about how else I can bake with these two flavours.

The chocolate blackberry pudding had a rich texture but without being too heavy. A touch of cream on the side would be a great choice too. The Chief Taster munched into his serving happily. Then declared it a bit sweet. Eyebrows were raised. This comes from a man who unsupervised, would munch a packet of biscuits or store cakes without ever mentioning the sweetness. So, a lecture on the sweetness levels of alternatives was given. He was lucky that he didn’t get a PowerPoint presentation from me with extra graphs. I will start preparing one for a later event. Or as a deterrent.

Coconut flour was used to make this chocolate blackberry pudding and is surprisingly light and moist. The trick with baking with coconut flour is always the liquid. I added an extra egg to my initial estimation of the recipe when I was beating the cake mixture as the texture was not as it should be. A couple of tablespoons of coconut milk and I have the pudding texture that I wanted. It tasted good raw too! It’s a great chocolate pudding recipe that could be used with other berries too! 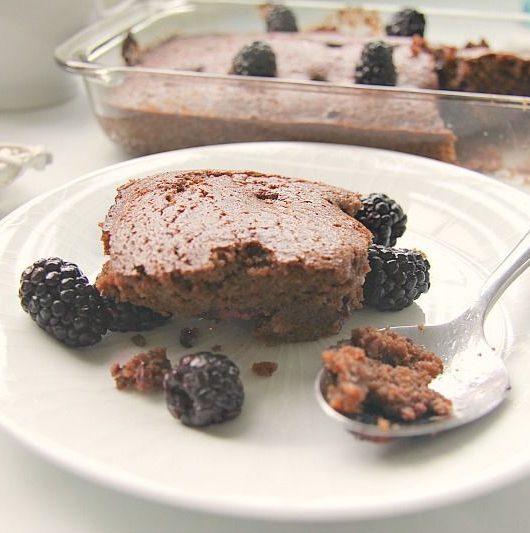 Serves 4 People (Or 2 over a weekend!) Nutritional Info per serving: 555 Calories, 54g Fat, 9g Protein, 13g Total Carbs, 7g Fibre, 6g Net Carbs
Have you tried this recipe? Leave a review or take a picture and share it on InstagramMention @Divalicious_Recipes or tag #divaliciousrecipes