Colcannon is an Irish recipe of mashed potatoes with kale or cabbage. There are a few variations with leek, garlic and bacon. I had recently made a mashed cauliflower dish that received a standing ovation from the Chief Taster so thought I’d try a colcannon dish substituting the potato with cauliflower.

For this recipe, I used half a head of a medium sized cauliflower and half a head of a medium savoy cabbage as I wanted to make enough for us, not a side dish that can feed a large family. The result was a large side dish that took over our plate along with the main dish we had. It could stretch to 4 people if you had smaller portions than we did and wanted other vegetables too.

This cauliflower colcannon recipe was just delicious. I could have eaten a plate of this just by itself. The cabbage is gently fried in butter, then added to the mashed cauliflower. I added some cream to make it extra creamy. Delicious as it is, you could try this with mustard, garlic powder or Parmesan cheese. Perhaps some bacon for all you meat eaters too.

With St Patrick’s Day coming up this would definitely be a great dish to have. Although as I type that I cannot help but laugh to myself and think of the various St Patrick’s Day celebrations I used to go to in London. There was nothing low carb those nights! Fun nights in an Irish pub, with lots of beer, a live band and roasted potatoes for bar snacks. Then the inevitable dash for the last train home. We did it all again in Dubai where they have a large Irish Pub called the “Irish Village”. My liver is still recovering.

This will make a great comfort side dish any day too. All the taste of a stodgy comfort dish with a lot less carbs! Simplicity itself and very delicious.

Other low carb side dishes 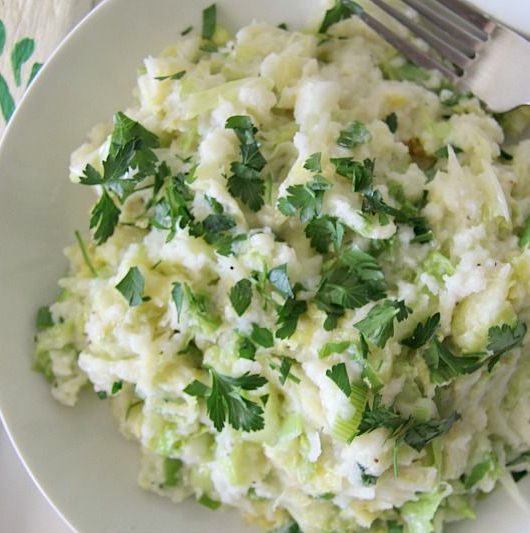 Serves 2-4 People Nutritional Info per serving (¼ of the recipe) -  159 Calories, 15g Fat, 3g Protein, 7g Total Carbs, 3g Fibre, 4g Net Carbs
Have you tried this recipe? Leave a review or take a picture and share it on InstagramMention @Divalicious_Recipes or tag #divaliciousrecipes