These low carb black forest cupcakes are utterly delicious and addictive. Moist low carb chocolate cupcakes, filled with a chocolate ganache and a luscious cherry, then topped with whipped cream with a cherry on the top are the ultimate low carb & gluten free cupcake.

Low carb black forest cupcakes are a dessert in themselves that also looks pretty and inviting. Bring a batch to a gathering and watch them disappear!

Black forest cake is a cake from my childhood and has a link to my German heritage where my grandmother came from. When my German great-grand Mother from Hamburg used to visit (I was lucky to have both my grandparents and great-grand parents alive as a child), bottles of Kirsch, a sweet cherry liquor would appear. A black forest cake would then be made! Layers of chocolate sponge, cream and cherries soaked in Kirsch was a family favourite.

Rather than baking a low carb black forest cake which I knew in advance we WOULD eat in one sitting if it was delicious, I decided to bake cupcakes inspired by the black forest cake. A divine combination of chocolate, cherries and cream was created!

After baking a batch of these low carb black forest cupcakes, I took these to my art class as there was no way that I could have trusted myself and the Chief Taster to not eat the whole batch that evening. When I bake a lot of desserts, I remove them from the house for our own safety. This took a lot of will power after I had taste tested the first cupcake.

How to Make Black Forest Cupcakes

I used coconut flour to make the chocolate cupcakes as it’s my preferred low carb flour for desserts. Almond flour could be used instead, and I would use about 1 ½ cups of almond flour for this recipe.

I make the chocolate ganache first so that it has a chance to thicken before using as the cupcake filling. It can be made ahead a day before with any left over to be used as a cupcake frosting or even as a filling in a low carb crepe.

You could add a sprinkle of rum to the chocolate cupcakes once the well has been made. This only occurred to me after I munched my 2nd cupcake so I will be doing that for the next batch!

How Do You Thicken Chocolate Ganache?

If the chocolate ganache does not thicken after cooling, whip it for a few minutes. It has cream in it, and the whipping process will add air into it. A whipped ganache can also make a delicious cupcake frosting.

What Cherries to Use?

I used fresh dark black cherries and removed the stone. You could use frozen sour cherries and defrost them. However, with all frozen berries, check the label for any additional sugar. Most canned cherries have sweetener but there may be a brand out there suitable for use. I'm on a small island with limited supplies!

OTHER CUPCAKES TO BAKE: 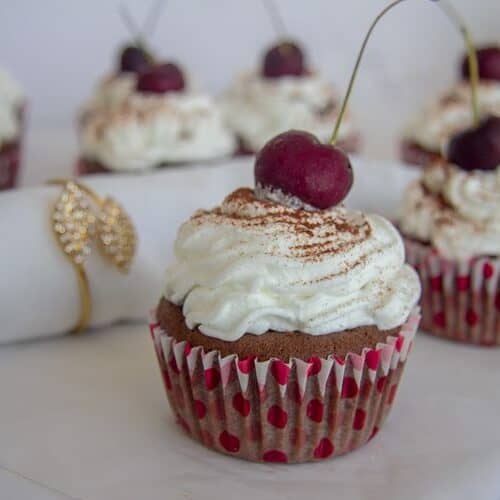 A a splash of rum to the chocolate cupcake wells before filling for an adult cupcake. The net carbs will be the total carb count minus the fibre count. Carb count excludes sugar alcohols. Any nutritional analysis on the website is based on an estimate, calculated by http://nutritiondata.self.com from the individual ingredients in each recipe. Variations may occur for various reasons, including product availability and food preparation. We make no representation or warranty of the accuracy of this information.