A gluten-free Jaffa Cake perfect for an afternoon snack.  A Jaffa Cake is an English biscuit sized sponge cake with an orange jelly centre and is covered by chocolate.

The British TV series "The Great British Bake Off" has started and I am watching this like a sports show with lots of yelling at the screen as I watch it with a view to "how could I make that gluten-free".  And the innuendos too amuse me.  A great part of British humour being the double-entendre.   The first episode had Jaffa Cakes as a task and I immediately thought of the coconut flour recipe I could use.

A Jaffa Cake is an English biscuit sized sponge cake with an orange jelly centre and is covered by chocolate.   My challenge was the jelly.   I tried to use a sugar-free jelly but although it had the bright orange colour that I was looking for, I did not care for the taste of artificial sweetener.  So I made my own jelly.  This is simple enough and although I used gelatin, you could use agar to make it vegetarian.  I asked for agar in our local health food shop and was met with a blank look, so no hope of me making a vegetarian jelly here!

The net carbs are not as low as I would have hoped for and I wonder if this could be made with a topping made purely of coconut oil and cocoa powder.  One to try another day.  It's more a gluten free recipe and fans of coconut flour.   I am delighted with the sponge though as it is pretty much like the real thing!

Another tip I will pass on is, don't put the melted chocolate over the jelly until it has cooled a bit.  My first batch melted the jelly and almost gave the cakes a chocolate marble topping.  All very pretty but not what I was aiming for!

I found the recipe delicious and had to show a small amount of restraint of not munching them all as the Chief Taster was away on work and would have had divorce papers in his hand at the airport when I picked him up if at least 2 were not put aside for him.  It probably didn't help that I kept sending him photos of them as I was putting them together! 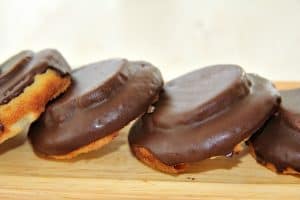