An eggplant salad flavoured with sumac.  A delightful lemon tang to these salad influenced from my time in the Middle East.

I loved, loved, loved this dish as it ticked all my boxes, looked pretty, easy to make and tasted yummy.   Sumac is a spice used in many Middle Eastern dishes and has a lovely mild lemony flavour.  It is used on Fattoush salad too.  One of my Lebanese colleagues tells me he sprinkles sumac on his eggs in the morning which I must try as that sounds yummy.

Although I cooked this dish on the bbq as part of the joy of living in a warm country, you could make this by cooking the eggplants on a griddle pan or under the grill.   Recreate the flavours of summer on a wet and windy day!

If you don't have sumac you could simply use lemon rind and lemon juice for the zesty flavour of this salad.   It's what I do when I having a little sulk about not being able to get any sumac.  It's not quite the same, but it will do! 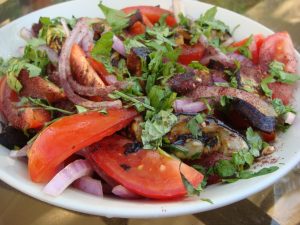 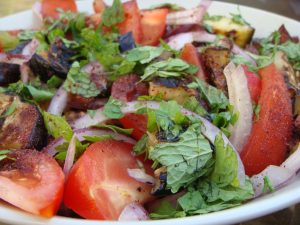